Aim and objective: To describe small round blue cell tumors (SRBCT) of the sinonasal cavity which are tumors that are likely to be misdiagnosed due to their presenting features that often mimic each other.

Background: Small round blue cell tumors clinically tend to cause symptoms of nasal obstruction and epistaxis. They have overlapping histologic and immunophenotypic findings; hence, a proper workup is required to reach the proper diagnosis and for further management of each case.

Case description: We present two cases of SRBCT, where the patients presented with a 1-month history of nasal obstruction and episodes of epistaxis, along with ophthalmologic symptoms in one of the cases. The patients were diagnosed with histopathology and immunohistochemistry and responded well to surgical treatment and chemoradiotherapy.

Conclusion: Sinonasal masses with erosive potential can have a wide differential diagnosis. Small round blue cell tumors respond well to surgical debridement and combined chemoradiotherapy, which can effectively prevent tumor recurrence in many cases.

Clinical significance: Early diagnosis and proper management of the tumors effectively improve the treatment outcome and lead to lowering of mortality and morbidity for the patient.

Malignant neoplasms arising in the nasal cavity and paranasal sinuses (sinonasal malignancies) are rare and comprise %3C;1% of all malignancies1 and only 3% of malignancies involving the upper aerodigestive tract.2

One such area is the “small round blue cell” tumor category. This group of tumors encompasses a wide diversity of both benign and malignant neoplasms. The separation and distinction between tumors is critical as some are managed by conservative medical therapy, others by local surgery, a different group by primarily radiation, some by chemotherapy only, whereas others are managed by exenterative surgery and multimodality therapies.

Here, we present two cases of small blue round cell tumors of the sinonasal tract, along with their management.

An 18-year-old woman presented with left-sided nasal obstruction for 1 month, associated with one episode of epistaxis.

Anterior rhinoscopy was normal but on diagnostic nasal endoscopy (DNE) polypoidal mass was seen with secondary changes on the surface in the sphenoethmoid recess.

Computed tomography (CT) of the nose and paranasal sinuses showed mildly enhancing soft tissue attenuation lesion in left ethmoid sinuses, sphenoid sinus, left side of the nasal cavity, and left choana—suggestive of a sinonasal mass. It also showed erosion of the posterior wall of the left maxillary sinus and left lateral wall of the sphenoid sinus (Fig. 1).

The patient was taken up for excision biopsy of the mass under general anesthesia. Mass was excised and found to involve the left maxillary, ethmoid, and sphenoid sinus, and tissue was sent for histopathology. Erosions were observed in the ethmoid and sphenoid sinuses (Fig. 2). 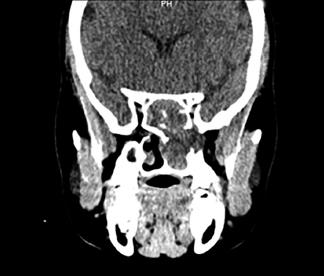 Fig. 1: CT of the nose and paranasal sinuses showing mildly enhancing soft tissue attenuation lesion in left ethmoid sinuses, sphenoid sinus, left side of the nasal cavity and left choana with erosion of the posterior wall of the left maxillary sinus and left lateral wall of sphenoid sinus

The tissue histopathology showed pseudostratified columnar epithelium, with a tumor in the subepithelium composed of hypocellular and hypercellular areas. The hypercellular areas were composed of round to oval cells with hyperchromatic nuclei and scanty cytoplasm. The hypocellular areas showed myxoid change with spindle and stellate cells mixed with inflammatory cell infiltrate. Peritheliomatous arrangement of tumor cells was also seen, along with areas of necrosis.

Immunohistochemistry was positive for CD99, FLI 1, and NSE, and was negative for Pan CK, LCA, desmin, synaptophysin, and chromogranin. Features were suggestive of Ewing sarcoma (ES)/primitive neuroectodermal tumor (PNET).

The patient was subjected to an FDG PET scan which showed no other metastatic disease.

The patient was started on chemotherapy by VAC regimen (vincristine, dactinomycin, and cyclophosphamide) for 12 monthly doses.

MRI brain and optic nerves showed displacement of the medial rectus muscle and optic nerve, and extension of the mass into both the nasal cavity and the nasopharynx (Fig. 4).

Once suspicion of angiofibroma was ruled out on radiological findings, a transnasal biopsy of the nasal mass was performed and histopathology revealed fibrocollagenous tissue with infiltration by tumor cells arranged in nests, cords, and alveolar pattern. The tumor cells showed scant cytoplasm and large round hyperchromatic nuclei along with areas of hemorrhage, necrosis, and inflammatory cell infiltrate. The features were suggestive of a small blue round cell tumor (SBRCT).

Extensive debridement of the mass was done under general anesthesia, and tissue was sent for histopathological examination, which confirmed the biopsy findings.

Features were suggestive of alveolar rhabdomyosarcoma

The patient was started on combined chemoradiotherapy with a VAC regimen. On follow-up, there was an improvement in vision of the right eye from 6/18 to 6/12. 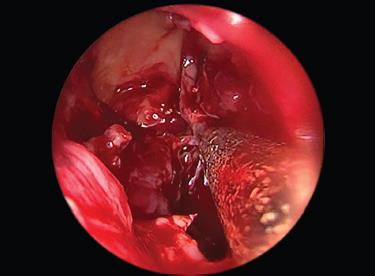 Fig. 2: Erosions were observed intraoperatively in the ethmoid and sphenoid sinuses

Figs 3A and B: (A) Clinical examination revealed a reddish friable mass, which bled on touch in the right nasal cavity, insensitive to touch; (B) Proptosis of the right eye 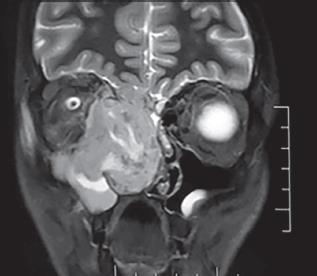 The differential diagnosis for small round cell tumors in the sinonasal tract is diverse and a thorough approach should be taken before rendering a diagnosis. Small tissue samples, with limitations of tumor volume, lack of architectural context, and a non-specific gross description, often make it difficult to reach a diagnosis. The pathologist may need to perform ancillary studies, including a broad panel of immunohistochemical stains and molecular studies.3

Ewing’s sarcoma/PNET is a closely related family of small round cell sarcomas with varying degrees of neuroectodermal differentiation. This was first described by pathologist James Ewing in 1921.4

Two clinical types of ES can be defined. The classical skeletal type may appear in any bone of the body; most frequently in long bones (35%) and pelvis (24%). The extraskeletal ES/PNET type usually occurs in the lower extremities, paravertebral tissues, chest wall, retroperitoneum, and occasionally head and neck (2–7%).5

Fertillo described four cases of head and neck sites that were most likely of skeletal origin6 but there are only several reported cases of sinonasal ES.7 It usually affects those <20 years old and has its peak incidence between 10 and 15 years. There is a 1.5:1 male to female ratio for this tumor.8,9

Due to advances in the treatment of EFT in recent years, survival rates (for all sites) are reported to have improved and have reached up to 86% in patients with non-metastatic disease at initial presentation.11 Those with metastases have poorer outcomes.11 Approximately 12–38% had metastases at first presentation.11,12 Approximately 32% of patients overall died of the disease in one study11 and those with metastases had an overall survival of only 21% in another study.12

Tumors are managed with multimodality therapy consisting of surgical debridement, chemotherapy, and radiotherapy, but there is a risk of post-treatment sarcoma development. Poor prognosis may be related to p53 aberrations.13

Rhabdomyosarcoma is a rare tumor that typically affects children and adolescents, with an annual incidence of 4.3 cases per 1 million population aged <20 years, with a peak incidence between ages 3 and 5 years and a second, smaller peak in adolescence, after which the incidence drops significantly with increasing age.14

Rhabdomyosarcoma arises in the head and the neck region in 40% of the cases. It commonly metastasizes to the lung and cervical lymph nodes. Patients’ prognosis depends on the age of the patient, histologic and clinical stage, and the exact tumor location. In the head and neck region, RMS is generally found in 1 of 3 characteristic sites: parameningeal, meningeal, and orbital. Parameningeal locations are the most common and include the middle ear, nasal cavity, paranasal sinuses, nasopharynx, and infratemporal fossa.15

Histologically, fibrovascular septa separate the tumor into nests of small to medium round cells, which aggregate in the center, showing a clinging dilapidated appearance at the fibrous septa.10

Small round blue cell tumors should be kept in mind while dealing with undifferentiated masses of the sinonasal tract, especially in childhood a high degree of suspicion should be present. A thorough clinical and endoscopic examination along with imaging is a must for the complete evaluation of such patients. The most common symptoms of such patients are nasal obstruction and epistaxis. Although eye symptoms are not present in every case, a thorough neurological and ophthalmological examination should be done. Early diagnosis and treatment of such patients lead to prognostic improvement and less morbidity for the patient.

Early diagnosis and proper management of the tumors effectively improve the treatment outcome and lead to lowering of mortality and morbidity for the patient, without exposing the patient to unnecessary investigations.