Background: Binder’s syndrome or maxillonasal dysplasia is a rare developmental anomaly affecting the anterior maxillary region and nasal complex. Its causes are unclear and it is characterized by an extremely flat nose and retruded midface with a concave profile.

Case description: We describe here a case of an 18-year-old male patient who presented with external nasal deformity since birth. On examination, the patient had classical features of the condition described by von Binder in 1962. Using costal cartilage graft, the nasal dorsum and the premaxilla were augmented by combined oral vestibular and external rhinoplasty approach. A brief review of the anomaly and the proposed treatment options in accordance with the age and the degree of malformation has been discussed.

Conclusion: Satisfactory correction of the maxillonasal deformity, to achieve pleasing esthetics without functional limitations, is a challenge for surgeons.

Clinical significance: This case report highlights the importance of correctly diagnosing patients suffering from Binder’s syndrome (maxillonasal hypoplasia) and providing them with appropriate management. If clinicians miss this diagnosis, the desired surgical outcomes may not be achieved by rhinoplasty only without premaxillary augmentation.

Even before K H Binder gave its classical description, Zukerkandl in 1882, described a condition in which the normal crest that separates the nasal floor from the anterior surface of the maxilla was not present, and in 1939, Noyes described a patient with retruded maxillonasal base.3 Binder, in 1962, gave a compendious report of three unrelated children having the following six special characteristic features of the syndrome.

Individuals with Binder’s syndrome have a typical facial appearance with a retruded mid-face, flat nose, underdeveloped upper jaw, relatively protruding lower jaw, half-moon shaped nostrils, and perialar flattening resulting in concave midfacial profile. There may be malocclusion of teeth as well.5–7 We hereby report to you a rare case of Binder’s syndrome and its surgical correction in collaboration with our plastic surgery department.

An 18-year-old male patient presented with the chief complaint of external nasal deformity since birth. There was no history of any other significant complaints or trauma. His mother gave no significant history of any antenatal/perinatal event or drug intake. Family history was unremarkable. On external nasal and facial examination, a retruded hypoplastic midface was noted. The dorsum was inspected from both the frontal and the lateral views. “On frontal view examination, it appeared flattened with a broad tip” (Fig. 1). “On the lateral view, there was an acute nasolabial angle due to the presence of a deep fold between the upper lip and nose. The frontonasal angle was around 180°. The alar basal region showed localized hypoplasia” (Figs 2 and 3). The upper lip was convex with a broad philtrum. “On basal view, both the nostrils were crescent or semilunar shaped with a short columella” (Fig. 4). The internal nasal examination was unremarkable. Intraoral examination revealed Angle’s class I dental occlusion with no malalignment of teeth. Rest otorhinolaryngological and systemic examinations were normal. “Lateral cephalogram showed concave facial profile with hypoplastic anterior nasal spine and posteroanterior shortening of the maxilla (reduced sella-nasion distance and reduced length of the maxilla measured from the anterior surface to the posterior nasal spine). The frontonasal angle was almost absent and mandible demonstrated pseudoprognathism” (Fig. 5). The patient was diagnosed with Binder’s syndrome and he underwent surgical correction by combined oral vestibular and external rhinoplasty approach. 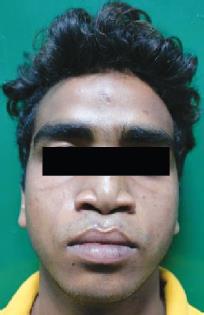 Our goals of the treatment were single-stage nasal dorsal augmentation, columellar lengthening, and premaxillary augmentation using costal cartilage grafts. “The costal cartilages of the fifth and the sixth ribs were harvested” (Fig. 6). Their central sections were refashioned into three cartilaginous strips which were dipped in 0.9% NaCl and gentamicin solution to prevent warping. Using two of them, an “L”-shaped strut was made for dorsal augmentation and columellar lengthening. The third one was shaped for premaxillary augmentation. “External rhinoplasty and sublabial incisions were made and after appropriate paranasal periosteal dissection, both the struts were placed over the dorsum of nose and the superior alveolar region to achieve the required anterior projection of nose and midface, respectively” (Figs 7 and 8). The struts were sutured to one another and the periosteum of the premaxilla. Additional stability was gained by intergraft fixation with the help of slots made in vitro. “Augmentation of the dorsum and the premaxilla led to an esthetically pleasing result” (Figs 9 and 10) with “significant improvement in the length of the columella and the shape of the nostrils” (Fig. 11) without causing any functional impairment.

Binder’s syndrome is also known by several other names like maxillonasal dysplasia, dish face deformity, fossa prenasalis, dysostosis maxillonasalis, and nasomaxillary hypoplasia. The majority of cases are sporadic for unknown reasons.7 Binder had suggested that there is a disturbance in the prosencephalic induction center during embryonic growth and believed it to be a form of arhinencephaly. However, patients did not have anomalies with their upper third of the face, brain, or olfaction to support this hypothesis.7 Rare familial cases with complex genetic factors and positive family history have also been reported.8–10 Abnormal migration of neural crest cells, defect in the genome for midfacial osseocartilaginous development, birth trauma, and developmental insults like gestational vitamin K deficiency and exposure to teratogenic drugs have also been considered as etiological factors.6,11,12 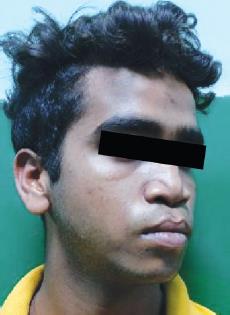 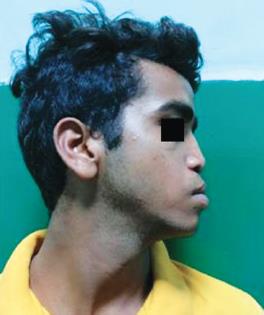 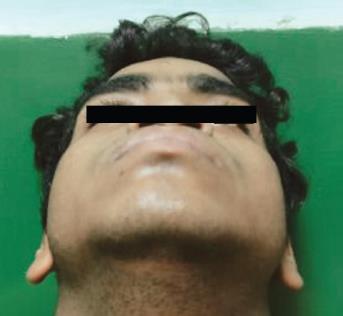 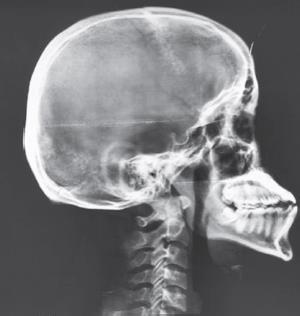 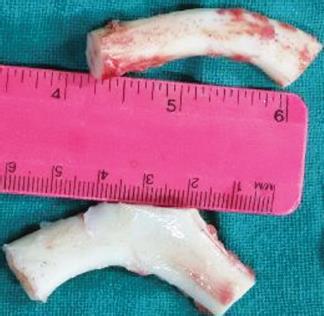 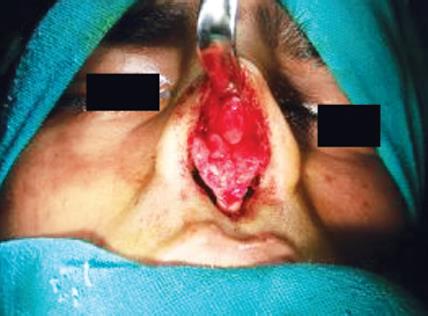 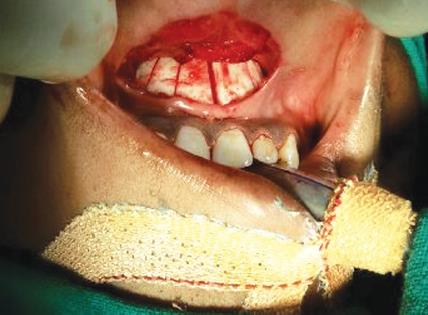 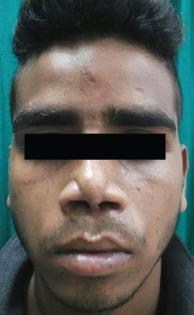 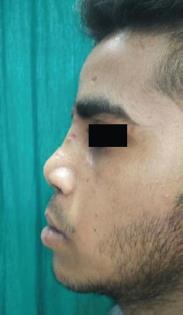 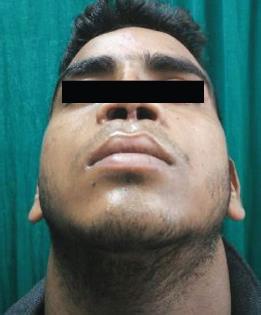 Diagnosis is made mainly on clinical and radiographic details including cephalometry, profile planning, psychiatric evaluation, and occlusal relationship.1

Before a treatment plan is formulated, the patient’s age at presentation, degree of deformity, occlusion, and esthetic desires of the patient and guardians must be taken into account.1 Munro stated that treatment should be directed at three defects: short maxilla, perialar flatness, and the hypoplastic nose with the short columella.15

Tessier et al. stated that in newborns with respiratory problems, endonasal tubes can be used followed by costal cartilage grafting if required.16 Till adolescence, orthodontic treatment may be given in the form of maxillary posteroanterior traction to combat occlusal problems.7,16 Surgery may be performed once the patient reaches adolescence or adulthood, comprising of augmentative rhinoplasty alone in case of normal occlusion and additional orthognathic procedures (LeFort I/II/both) in case of malocclusion.15–17

However, according to Ortiz Monasterio et al.7 and Holmstrom,17 treatment starting early in life improves psychological well-being and the corrected facial profile follows a pattern similar to normal growth. Former advised sequential lengthening procedures of dorsum and columella at young age reserving paranasal and midfacial augmentation until growth is near complete.7 Holmstrom advocated septal advancement technique in 10- to 12-year age group resulting in soft and flexible nose and bone grafts in teenagers.17 Bhatt et al. agree with the use of at least onlay grafting without osteotomies at an early age with minor secondary corrections later. Our work is similar to his using costal cartilages for single-stage premaxillary and nasal augmentation along with columellar lengthening in an adult patient.5

Osteotomies and autologous bone and cartilage grafts have been traditionally used through various internal and external approaches by different authors mainly in adolescents.5,7 Ragnell used iliac cancellous onlay bone chips to augment premaxilla through a median incision at the columellar base and angulated block bone graft for nose in a single stage in teenagers.18 Holmstrom and Kahnberg did maxillary osteotomy followed by nasal improvement in two stages independent of the patient’s age.19 Converse et al. described a pyramidal naso-orbital maxillary osteotomy and oral vestibular approach to insert shell-like and “L”-shaped iliac bone grafts.12 Obwegeser puts onlay grafts with LeFort I osteotomy in Angle’s Class III malocclusions.20 Henderson and Jackson proposed LeFort II osteotomy and nasal advancement.21 However, it does not address the flattened nose and depressed alar base and can overcorrect mild class III to severe class II malocclusion. Munro combined LeFort I and II to combat these problems.15

Staging the procedures is important while following children for emotional and orthodontic reasons. Orthodontic procedures may begin early followed by nasal surgery with columellar lengthening, temporary silastic implants, and autologous grafts. As the child grows, the latter may have to be augmented. When growth has ceased, osteotomies can be done.1,6

With bone grafts, there can be resorption, displacement, extrusion or remodeling, and/or skin necrosis, especially if the soft tissue closure at the tip is very tight. The patient may complain of stiffness and rigidity of the tip and long-term donor site pain. Costal cartilage grafts, on the contrary, maintain their volume and impart a more natural feeling to the patient. Warping of cartilages can be prevented by carving struts from the center, placing them in 0.9% NaCl and gentamicin solution for half an hour, or inserting thin K-wires. Alloplastic implants have increased rates of extrusion, displacement, and postoperative infections besides not being cost-effective in developing countries.5

For correction of soft tissue deficiency in the columella, bilateral flaps from the nasal floor, free auricular grafts, small upper lip flaps, and VY-plasty can be used. In many cases, there is no real shortening and undermining at the lip-columellar junction is sufficient.5,22

Satisfactory correction of the maxillonasal deformity, to achieve pleasing esthetics without functional limitations, is a challenge for surgeons. As the characteristic features are evident at an early age, children presenting with these must be kept under observation by psychiatrists, orthodontists, and surgeons. Management is individually tailored according to the age at presentation and degree of deformity. Our patient is esthetically and functionally satisfied with single-stage correction and at annual follow-up, the costal cartilage grafts were in place without any postoperative complication.

This case report highlights the importance of correctly diagnosing patients suffering from Binder’s syndrome (maxillonasal hypoplasia) and providing them with appropriate management. If clinicians miss this diagnosis, the desired surgical outcomes may not be achieved by rhinoplasty only without premaxillary augmentation.